Hit enter to search or ESC to close

Why Google Penalised The Scotsman

By Mark ProctorFebruary 21, 2013 No Comments

Last week, Google penalised The Scotsman and a number of other Johnston Press news websites for selling links.

To understand the reason for the penalty, you need to know a little about how Google’s search engine ranking system works. At the moment, around 200 different factors are used to determine which sites are at the top of the page when you type a query into Google and hit the search button.

One of these – and still one of the most important, is the number, and quality of links from other websites that the site in question has.
So – if Google has to choose between two sites with very similar content and structure, the site that has 200 other sites linking to it can typically be judged to be more trusted and established than the site with 10 others linking to it (provided the links come from trusted sites). Google assigns each website a score between 0 and 10 based on the number of other sites linking to it, and that score is named Pagerank. The USA Government’s website is a 10, Facebook is a 9, the blog you set up a few years ago and posted to twice is a 0. Building a high pagerank score takes a lot of work.

Additionally – over time, Google has become much better at understanding trends and online ‘buzz’ – so if a lot of websites suddenly start linking to one in particular within a short period of time, Google’s algorithm will pick up on that, and is more likely to promote that site in the search engine results- in the short term at least.

Buying links from other sites therefore, can impact the algorithm, and in turn, the ranking of any particular site – affecting the quality of the search results. Which is why Google states that the practise is against their webmaster guidelines (guidelines that anyone managing a large website, or with an interest in SEO will be aware of):

Note the key classification of “links that pass PageRank”. The many ads you see across thousands of established sites avoid penalisation by not passing pagerank – all they do is send traffic to a site – they don’t attempt to imply to Google that the link is natural or organic and should therefore be considered a pagerank ‘vote’ – they’re shouting to Google “this is an ad!”, by using a simple change to the link code that tells Google’s algorithm not to follow the link. These types of link are therefore called ‘nofollow’ links.

Valentine’s day was approaching, and Interflora’s marketing team were faced with the task of ensuring that their site appeared at the top of the Google results for the many upcoming flower related searches.

Google’s own data suggests that an average of 2,740,000 searches broadly related to flowers are completed each month in the UK, 1,220,000 for ‘florists’, and 201,000 for ‘flower delivery’ – with Valentine’s day approaching, the number of queries including the term Valentine would increase, and a high rank for those queries would make a big difference to Interflora’s sales over a peak trading period.

Some studies estimate that the site ranking first on Google gets 53% of the traffic for that query, so the potential benefits to the site at number 1 are obvious.

Valentine’s Day is the busiest time of the year for ‘flower delivery’ after Mother’s Day.

So – Interflora created a bunch of ‘advertorials’ – paid for content, full of Valentine related content (the text used for, and around links is used by Google to determine the queries that sites should rank well for). 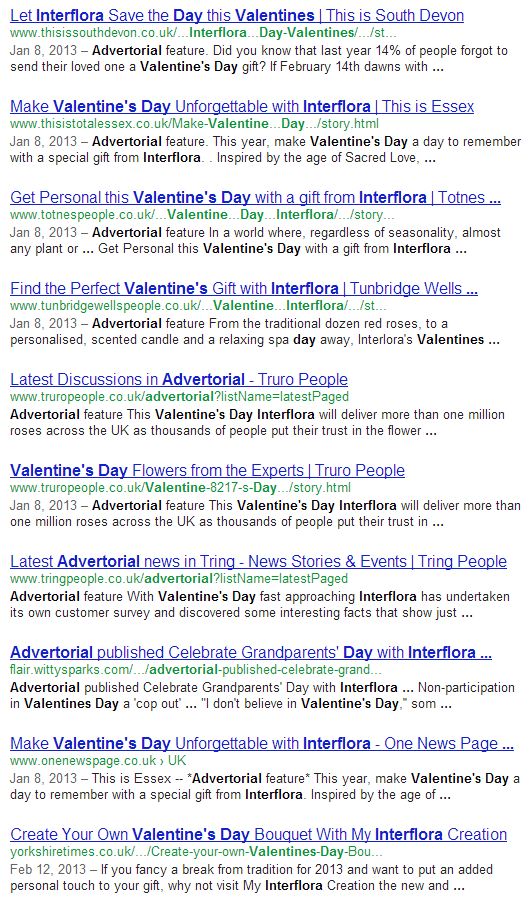 They paid Johnston Press to put the advertorials on their sites – not just The Scotsman, but also a host of their regional news sites.

The expected effect being a boost in ranking on Google’s results pages for Valentine Flower related queries – these would be good quality links, from established, trusted sites, which are the links that really make a difference.

Critically, the advertorials did not use the ‘nofollow’ code on the links to Interflora’s website, and were quite specifically designed to pass pagerank and encourage Google’s algorithm to associate specific (Valentines) terms with the Interflora pages they linked to.

This was a big campaign that violated Google’s webmaster guidelines blatantly, on a large scale – across a range of news sites that Google trusted and awarded relatively high pagerank scores. Google noticed.

At the time of writing, if you run a search for Interflora on Google, you’ll only see paid for advertisements – their organic search listing has been removed. No Interflora sites will show organically for any flower related queries. If they want traffic from Google at the moment, they need to pay for it, and at a current average cost per click of £1.92 for ads targeting the term ‘flower delivery’, their search engine related traffic has recently become considerably more expensive to attain.

The whole Interflora/Johnston Press situation compelled Google’s anti-spam chief Matt Cutts to write this reminder that advertorials should not contain links that pass pagerank. You know your website is in hot water if that guy is blogging about what you’ve done wrong.

The Scotsman and JP’s regional news sites were not removed from the search results for selling paid links – you can still find The Scotsman’s site if you perform a brand related navigational search.

For the Scotsman website, this is a disaster. Dropping to a pagerank of 3 means that the search engine rankings they used to command for generic searches are gone.

Here are the top ranking sites on google.co.uk for the term ‘Scottish News’ (look at the Pagerank (PR)):

Currently, the Scotsman is halfway down page 4 of google.co.uk for this query.

And the top ranking sites for “Jobs in Scotland”:

I gave up looking for The Scotsman in the results for this query after page 5.

The bottom line is that these types of informational searches will no longer bring traffic to the Scotsman site – the competition is now trusted more.

So the Scotsman website finds itself in a situation where the only traffic they’ll get will be paid for or brand led.

So – declining brand led traffic and negligible Google search traffic for the foreseeable future. No new visitors from Google, and declining brand loyalty. The Scotsman website just became a very tough sell to any potential advertiser.

The Scotsman team prior to the Johnston Press purchase were slow off the mark with the web side of the business – for many years the Scotsman’s website design, user experience and functionality were years behind the competition. Today, the site resembles a generic content management system, and has nothing to differentiate it from the numerous alternative online news sources available.

Recovering from a Google penalty as severe as this takes time and a lot of work. In order to climb back up the ladder, you need to consider how a site can become an authority again, generate fresh new content and get links because they’re creating content that people actually want to link to.

For an established newspaper site, that should be second nature, but the decline in The Scotsman’s circulation has meant cutbacks, less journalists & more recycled news from other sources.

The question facing Johnston Press is whether or not they have the resources to pull themselves back up now they’ve indirectly opened the door for their competition to step in.

If that digital revenue was driven by advertising that violated Google’s guidelines – it’s gone. No tech savvy marketing manager will risk an ‘Interflora’ now. If it was driven by ads sold on promises of pageview and impression stats, those stats just became redundant – from February this year, the Scotsman’s website traffic will drop massively. If it was sold on the promise of search results – who would advertise a job on a site that can’t be found by people looking for a job?

For the Scotsman to recover, it will take considerable strategic changes to their site, content strategy and advertising policies. Changes that would appear to be contrary to Johnston Press’ current model.

Failing to address these matters quickly will leave a historic brand that struggled to make the digital leap, floundering in online obscurity.

Thanks for reading, I try to update this blog with interesting digital marketing stuff whenever I can, so please consider following Media Chimps or myself (Mark Proctor) on a social network of your choice.

PS – Here’s a (nofollow) link to The Scotsman’s site.

Edit (27/03/2013): Just checked today and the Scotsman’s site pagerank has been returned to 7. All offending links have been removed, and Google must have decided that a temporary punishment was enough.

Edit 2: I’ve changed the site around since this blog was originally published, and the commenting system is different now, so I’ve attached a screenshot of the original article comments below so they’re not removed from the site. 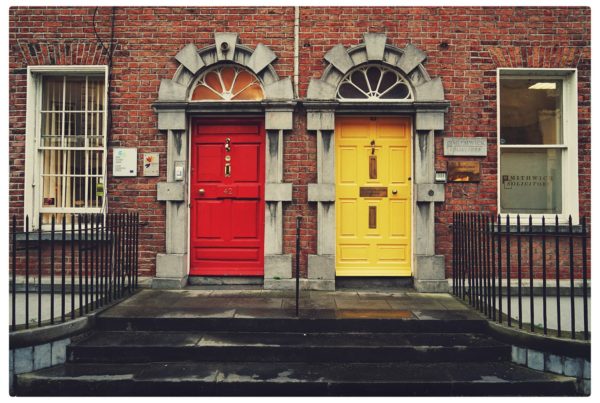 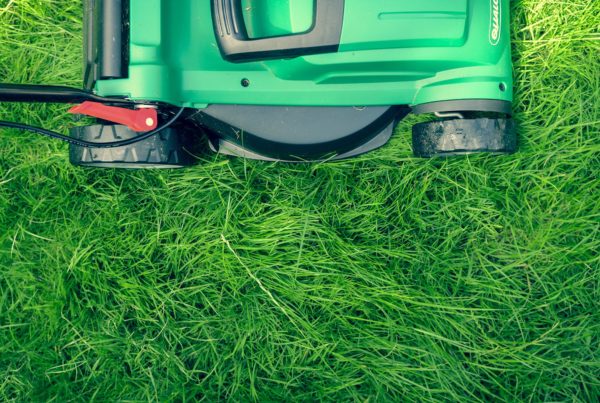 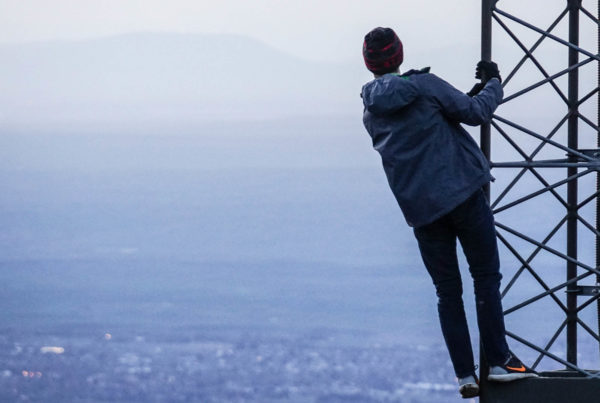 Based in Fife, Scotland
All rights reserved.